2. In 1924, Anders Haugen became the fist and only American to win a medal in ski jumping. However due to a scoring error, he was not recognized as the bronze medal winner until 50 years later.
A 50 year reunion of the Norwegian trio that swept the 1924 medals was to be held in 1974. Before the reunion, a sports historian, Jacob Vaage, discovered a scoring error an alerted the Olympic committee who finally recognized Haugen as the champion. Haugen was presented with his bronze medal at age 86, 50 years after the competition

3. The 1960 Winter Games were surprisingly awarded to Squaw Valley, California, and small ski resort with one chair lift, 2 rope tows and one 50 room lodge.
To save cost, the Squaw Valley Games chose not to build a Bobsled run, the only games that did not include a Bobsled Competition


4. Walt Disney was the head of the committee that organized the Opening and Closing Ceremonies for the 1964 Squaw Valley Games. 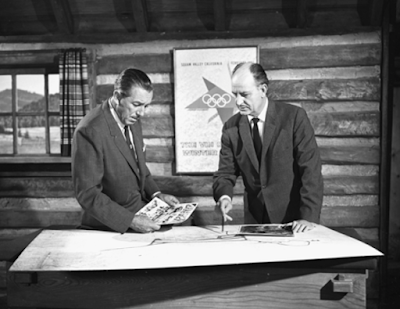 5. The 1976 Winter Olympic Games were awarded to Denver. But the citizens of Colorado voted against using any public funds for the games, and the city made the unprecedented move of withdrawing from the Olympics after already being chosen as host.
The 1976 Games were then awarded to Innsbruck, Austria who had recently hosted the 1964 Games and already had the infrastructure in place.

6. The 2022 Winter Games will be held in Beijing, China, despite the fact that Beijing gets virtually no snow.  The alpine venues will be the first to rely totally on artificially made snow

7.  To illustrate how good the Soviet Hockey Team that was upset in the 1980 Winter Games by a group of American college kids was,  it's interesting to remember that the previous year the Soviets played the NHL All Star Team in a three games series.  The 1979 Challenge Cup replaced that year's NHL All Star Game and the Soviets won 3 games to 2.